Craig McLachlan, the Australian actor accused of indecent assault, allegedly begged one of his colleagues to come back to work because he didn’t like the smell of another woman’s genitals.

Mr McLachlan was charged earlier this year over the assaults, which allegedly took place in 2014 and involved four women.

He has consistently denied the allegations, which coincide with the period when he was performing in The Rocky Horror Show musical.

The court today heard from a friend of one of the women, a theatre producer who cannot be named for legal reasons.

She was also a former neighbour of Mr McLachlan’s.

The woman said her friend was off work when she allegedly received a text message from Mr McLachlan begging her to come back to work because he did not like the “hygiene” of her understudy.

When asked by prosecutor Matthew Fisher what she meant, the witness responded: “that her vagina smelt.”

The court heard about several incidents the witness said had left her friend shaken.

She recounted being called by her friend while waiting to board a plane in Melbourne and being told that Mr McLachlan had “grabbed her by the face” after an incident on stage.

“The reason I remember it is because she was crying a great deal and I had to get onto a plane, and I was nervous to leave her,” she said.

On another occasion, the woman arrived for a readthrough for a television show when she saw that Mr McLachlan had been cast.

The witness said her friend had also told her that Mr McLachlan had touched her inappropriately.

“She told me that he had touched her vagina,” the witness said.

“How did she seem to you?” asked Mr Fisher.

Under questioning from Mr McLachlan’s barrister, Stuart Littlemore QC, the witness conceded she was extremely close to the woman.

“All you heard from [her] were allegations. You don’t know if any of them are true,” Mr Littlemore put to her.

Mr Littlemore asked the witness whether she and the woman had ever discussed Harvey Weinstein, the Hollywood producer accused of sexually assaulting women.

“Did [she] ever discuss Harvey Weinstein with you,” he asked.

“Did she ever tell you that she was not aware that anything Mr McLachlan had done amounted to sexual harassment,” he asked.

“Did she ever tell you … that she didn’t realise she’d been sexually harassed until she read about Harvey Weinstein raping actresses,” Mr Littlemore asked.

The witness said she didn’t recall the woman ever mentioning Mr Weinstein.

The hearing in the Melbourne Magistrates’ Court continues. 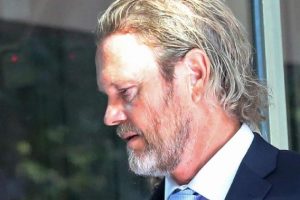