The textbooks tell us that successful retailers are the ones who offer great service, quality products and an excellent range of those products.

In supermarket land though, you could be forgiven for thinking that all that mattered was price because for nearly a decade we’ve been bombarded with, “Down! Down!” from Coles and “Cheap! Cheap!” from Woolworths.

Then there’s Aldi, whose whole raison d’etre is “cheap” and Costco, the US-based budget, big barn.

Dollar a litre milk has been the poster boy for the cheap brigade, but times are changing, with expensive cheese leading the way.

Unable to take on the big boys in a full-blown price war, IGA is betting that emphasising service will win out.

Its latest advertising campaign features an expat Irishman desperate to get some cheese from his homeland.

Even his parents back in Ireland refuse to help, so he turns to his local IGA store, and you can guess the rest?

“This campaign is the extra layer that our independent retailers offer and that is differentiated service through localised ranges and we’re telling real stories that have happened out in the market,” IGA head of supermarkets, Scott Marshall, told the ABC.

Even Coles and Woolworths are getting in on the act — although to a lesser degree — highlighting their product range, with campaigns like, “Good things are happening at Coles,” and, “That’s why I chose Woolies.”

“People will shop on value, and to get something, a brand, a product that they actually want, and they’ll be happy to pay for it,” IBISWorld retail analyst, Jo Munro explained.

According to research house, IBISWorld, the supermarket sector is worth nearly $110 billion dollars a year.

Between them, Woolworths and Coles have 66 per cent of the market.

German discount house, Aldi, is a long way behind in third, with less than 10 per cent. Metcash, which is IGA, has 7 per cent.

Costco has around 2 per cent.

Ms Munro says there’s definitely been a change in the way the supermarket chains are promoting themselves.

The biggest losers have been suppliers, many of whose profits have been smashed by the all-powerful supermarkets keen to cut prices, but keep their own profits.

A truce or peace in our time?

Suppliers who have clout have been playing hard-ball themselves. The fightback has often resulted in embarrassingly empty supermarket shelves.

Woolworths the latest to be hit when Mars Pet Foods and Uncle Toby’s dug their heels in earlier this year.

As the pendulum swings, even discount chain — Aldi — which has grabbed 10 per cent of the market with its extra low prices, is now selling a different message.

As anyone who regularly shops in supermarkets knows, prices of many items are starting to edge up — which will bring some relief for suppliers who have been squeezed now for many years.

But with German discount brands, Kaufland and Lidl, poised to come to Australia, the bad news for suppliers, and conversely, good news for shoppers, is that a return to the focus on cheap won’t be far away.

“When you scream cheap, cheap, cheap, cheap for a period of time, we go, ‘we get it, it’s cheap’ and so the cycle changes slightly, but you can never get too far away from cheap price, because really, that’s what the customer wants,” analyst Peter Ryan explained.

It is something all the supermarket chains know, which means they won’t get carried away with their new-found emphasis on service, quality and product range.

“There is still a focus on price,” IGA’s Mr Marshall said.

However, with only 7 per cent of the grocery market, IGA knows being able to get cheese from Ireland won’t save it, if just up the road the others are selling everything else for less. 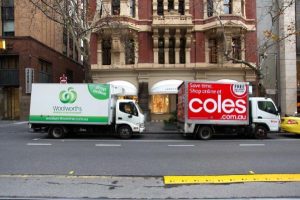