Three jailed in Bangladesh over crash that sparked mass protests

Three people have been handed life sentences in Bangladesh over a bus crash that killed two young students and sparked anti-government protests.

Demonstrations hit the capital Dhaka last year after two schoolchildren were run over and killed by a speeding bus.

The city was brought to a standstill, and more than 150 people were injured as authorities waged a heavy crackdown.

“We are happy with the verdict,” prosecutor Tapash Kumar Paul told the AFP news agency.

The owner of the bus company and his assistant were both acquitted.

Why did the crash prompt such a big response?

When the two children – a boy and a girl – were killed in July, the bus driver who hit them had reportedly lost control of the vehicle while racing another bus to pick up passengers.

The wave of protests that followed reflected widespread anger over dire road safety in the country.

The protests turned violent when police used tear gas and rubber bullets, injuring scores of teenagers. There were also clashes between the protesters and pro-government groups.

In the wake of the protests, the government passed a tough traffic law which means drivers found speeding can lose their licenses far more easily.

It drew a backlash from the country’s powerful transport workers’ unions – a lobby who have often limited the authorities’ curbs on drivers. 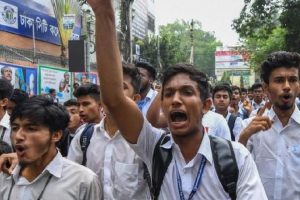