Dua Mangi: Slut-shamed in Pakistan for being abducted

However, the kidnapping might have gone unnoticed in crime-ridden Karachi as just another statistic – had it not been for a storm it raised on social media.

It started with her sister, Laila Mangi, posting Dua’s picture on Facebook with the news she had been kidnapped. Laila asked her followers to keep an eye out and inform the family if they saw her anywhere. One of her cousins made a similar request on Twitter.

There were also caustic comments on why she, a young woman, was roaming around with a male friend at night.

Though the mixing of sexes is becoming increasingly common in urban areas of Pakistan, traditional conservative elements still see it as dishonourable and un-Islamic.

However, a senior police officer, Shiraz Ahmad, told the BBC that this kind of debate on social media tends to benefit the offenders, making the job of the police more difficult.

Such naming and shaming causes added pain to the affected family,” she told the BBC.

She’s aware of cases where “families have withdrawn similar complaints with the police just so as to avoid such public shaming”.

According to police, the kidnapping took place in the Khayaban-e-Bukhari area of the city, in the upmarket Defence neighbourhood. Nearby

Police recovered both of their mobile phones from the site of the abduction.

Officers have obtained CCTV footage of the area and a geo-fencing exercise of mobile phones is ongoing.

Dua is the niece of a famous Sindhi language poet and columnist, Aijaz Mangi.

He describes her as a student of law who took an “active interest in issues related to progressive politics, feminism and human rights”.

He told BBC Urdu that Dua often went with her sister Laila to the Khayaban-e-Bukhari area, where fellow students gather in the evenings over a cup of tea and unleavened fried parathas.

“On Saturday, she went there with Laila, but Laila came home early while Dua said she would return later. After about an hour and a half”. 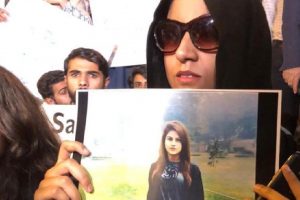