Business activity in Hong Kong contracted at the fastest pace in 21 years in November, dragged down by anti-government protests and softening global demand, an IHS Markit survey showed on Wednesday.

Increasingly violent demonstrations have disrupted the Chinese-ruled city for nearly six months, battering its retail and tourism sector and plunging its economy into recession for the first time in 10 years.

The seasonally adjusted headline Hong Kong Purchasing Manager’s Index (PMI) fell to 38.5 in November, down from 39.3 in October and signalling the steepest private sector downturn since April 2003.

A survey reading above 50 indicates expansion, while a figure below 50 denotes contraction on a monthly basis.

“The average PMI reading for October and November combined showed the economy on track to see gross domestic product (GDP) fall by over 5 percent in the fourth quarter unless December brings a dramatic recovery.”

Demand from mainland China shrank for a nineteenth straight month in November, although the pace of contraction eased from October.

Companies also continued to scale back their purchases of raw materials and other inputs, with 38 percent of survey respondents predicting weaker activity in the year ahead, citing political unrest and the protracted trade war between the United States and China.

Economists at ING said Hong Kong is sliding into a hard-landing recession.

“No one is expecting a sudden end to the violent situation. 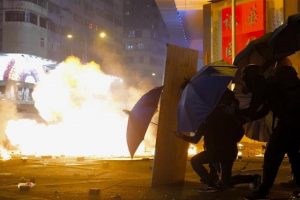