The men were in police detention and were taken back to the scene of the crime in the early hours of Friday.

The suspects were shot when they tried to steal the officers’ guns and escape, police told BBC Telugu.

After news of the killings broke, the victim’s mother told the BBC that “justice has been done”.

Meanwhile, neighbours celebrated with firecrackers, and thousands of people took to the streets to hail the police.

What happened on Friday?

Cyberabad police commissioner VC Sajjanar told BBC Telugu that police took the accused to the scene to reconstruct the crime.

Police shot the men when they tried to grab the officers’ guns and escape, he said.

The police were heavily criticised after the rape and murder of the vet – particularly when the victim’s family accused them of inaction for two hours.

How have the victim’s family reacted?

BBC Telugu’s Deepthi Bathini visited the family in their home, where neighbours could be seen celebrating the news by bursting firecrackers and distributing sweets.

“I can’t put it into words. I felt happiness but also grief because my daughter will never come home,” the victim’s mother said.

“My daughter’s soul is at peace now. Justice has been done. I never thought we would get justice. No other girl should experience what my daughter did.”

The mother added that she wants the law on sexual assault and rape to be “stricter”.

“Men should be scared to even stare at women – because they will be punished.”

The victim’s sister said the police action was “very unexpected”.

“I was expecting court trials and the court to deliver justice. This will not bring my sister back, but it is a great relief. Because of the police action, people will think twice before they do something like this again,” she said.

What has the wider reaction been?

News of the police action has been widely celebrated on social media.

The mother of a student who died after being gang-raped on a bus in capital Delhi in 2012 has also hailed the killing.

“I am extremely happy with this punishment. Police have done a great job,” she told ANI news agency. 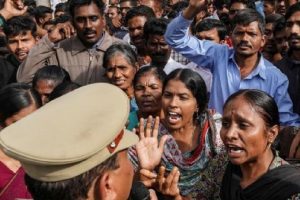