Tabitha Indonesia > News > Internasional > Colombia protests: What prompted them and where are they headed?

Colombia protests: What prompted them and where are they headed?

Bogota, Colombia – For nearly a week, thousands of Colombians have taken to the streets across the country in some of the largest anti-government protests the country has seen in decades.

What started as a plan for labour unions to strike has since ballooned into more widespread actions by indigenous groups, pensioners and students, among others, against the right-wing government of President Ivan Duque.

Aside from the marches, curfews, tear gas and looting has taken place throughout Colombia’s cities since the protests began last Thursday.

Many want Duque, who has been in office for 15 months, to step down or make radical changes to address his government’s weak implementation of the 2016 peace deal and issues related to economic reforms and corruption.

Duque has now promised to hold a “national dialogue”, but protesters remain sceptical and have planned more rallies.

As demonstrations continue to rock the country, Al Jazeera examines why they began and what may happen next.

1. What is behind the protests?

Discontent in Colombia has been simmering for months.

The call for the strike came as university students continued to protest against corruption and cuts in public education.

The call also came around the same time the country witnessed an uptick in violence against indigenous and social leaders, which has been blamed in part on Duque’s slow implementation of the 2016 peace deal with the Revolutionary Armed Forces of Colombia (FARC), signed during the previous administration. 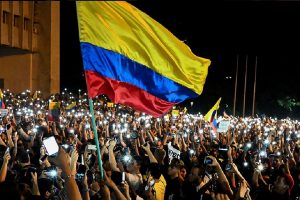